WOW! I have read these twelve novels over the past month. Each of these is terrific and I would say I would give each of these middle years and YA novels four star (out of four star rating). And I’ve given shout outs to THREE must-read titles.

THE COLOR OF THE SUN by David Almond

Plot: A boy named Davie  wanders through a countryside on a warm summer’s day. Davie’s mother urges him “Don’t hurry back. The day is long, the world is wide, you’re young and free.”  Davie’s father died a few years ago and obeying his mother, the boy now sets off on a journey, (literally and metaphorically, real and imaginary and literally). To add to the plot,  a teenager has been found stabbed in the town’s ruins. and Davie thinks he knows who the murderer is and will meet up with him on his wanderings.  Each encounter  (a priest, a one-legged tramp, two girls creating a world of fairies and monsters, a best friend, a frog, a ghost) that  lures him to question ‘the meaning of life’. This novel will not appeal to all middle age readers, but it’s worldliness and otherworldliness packed an emotional wallop for me.  Because this novel is still lingering in my mind, I would say it was one of my favourite reads this spring and sure to be in my top five books by year’s end. I haven’t enjoyed Almond books much since reading Skellig, but this one was a WOW! I think I shall reread this novel again soon. Beautiful, beautiful writing: “The starlings swirl in him. The fox prowls in him. It all becomes part of this kid, this ld, this boy-becoming-man, this ordinary fragment of the ordinary world.”

When Tylee Feder was in her first year of college, her mother was diagnosed with stage four cancer. This biography tells of the year of her mother’s death,  Jewish mourning rituals and the aftermath of dealing with grief.  Feder’s memories and fondness of her mother are strong but now she must deal with profound sadness. Any0ne who has lost a parent will especially empathize with Feder’s story and the ways she deals with death, loss and remembrance. The graphic format of this book add appeal (at times amusing) but mostly ignite author’s perceptions of the pain she felt. A great book!

7th grader Ross Malloy is diagnosed with rare eye cancer and in order to prevent total blindness he goes through surgery and daily treatments over a month. Ross struggles to accept his circumstances when all he wants to be is normal.  He has to deal with problems that many pre-teens face (bullies, falling in love, friendship circles) but having to deal with gobs of eye goo, hair loss, a weird cowboy hat and a squinty eye are not part of every 13 year old’s world.   Spot illustrations and comic panels appear throughout the book adding a sense of humour to the narrative.  Wink is a work of fiction but the details of the treatments were based on the author’s own experiences with cancer. Add this title to great books that deal with resilience and kindness.

Based on the author’s own story, a young girl moves to a farm with her mother and her mother’s boyfriend. Jen longs to return to the city but eventually relaxes into the routines of living on a farm (taking care of the chicks, setting up a stand at the market, catching frogs, milking cows etc.). A notebook of Jen’s drawings  and comics adds an extra visual appeal to this graphic story.

HOW IT WENT DOWN by Kekla Magoon (YA)

Tariq Johnston, a black teenager, is shot down by Jack Franklin who is white. In the aftermath of his supposedly gang murder, the people in the community has something to think, feel and say.  Accounts vary but somewhere lies the truth.  This is a story of a neighbourhood struggling to make sense of the tragedy and learning to cope. Magoon has chosen a cast of eighteen characters to address the controversial issues from different perspectives. In the notes at the end of the book, Magoon writes about the novel: “The book offers a chance for young people to discuss issues of race, community, violence, death, authority, voice perspective and truth with the safe space of fiction.  Hopefully it allows for a more open and less loaded conversation than might occur while discussing the real-world issues that the novel parallels…. I hope that this novel and other YA literature can be used to start conversations between teens and adults about the prevalence of these shooting incidents, and how we as a nation can begin to respond and heal from these tragedies, and hopefully learn how to prevent similar things from happening in the future. How It Went Down was published in 2014,

Readers who enjoyed meeting Westie, Harvey in Harvey Comes Home will be pleased to read another adventure about this loveable, faithful dog.  The story is told in short chapters from three different perspectives: Maggie, Austin and Harvey.  Harvey’s owner, Maggie has chosen to volunteer in the senior residence and although this is a positive experience (especially her relationship with Mrs.Fradette who has her own story to tell about being a female auto mechanic) but is troubled by changing friendships. Austin is concerned that his grandfather, the janitor at the the retirement home, is going to get fired and is on a mission to solve the problem. Everyone loves Harvey but his snooping around gets him in trouble with a mean old raccoon. The narrative passes by at a quick pace and readers will be wagging their tales as they read about the adventures of the appealing characters who appear throughout. The novel stands alone from the first book but readers will likely want to spend more time with the dog and the residents of the Brayside Retirement Villa.

How do we help middle age readers understand catastrophic events that happened in the world before they were born?  Tom Rogers tells the story that takes place on September 11th, 2001. It is the day that Alex Douglas turned eleven. It is the day that Alex’s mother went to work in Manhattan as a nurse and his father is scheduled to drive the train that goes underneath the twin towers. Rogers brings humanity to this story through the Alex’s eyes, who longs more than anything to get a new dog for his birthday. An engaging informative, almost like being there, reading experience for young readers who may or may not know much about the historical event that changed the world.

Wolk writes beautifully, poetically (Wolf Hollow, Beyond the Bright Sea) and with this third novel for middle years reader she once again demonstrates a talent for weaving setting and character together to tell a captivating story. It is the time of the Great Depression and Ellie and her family have moved into Echo Mountain, which perfectly suits this girl who immerses herself in the rugged natural world. An accident has left her Father in a coma and his revival is the central plots of the novel.  When Ellie discovers a ‘hag’ who lives alone in a cabin, she continues to learn about natural medicine, the stories that shape us and the importance of family. Scenes with a black snake, flesh-eating maggots, a bear, bee stings are as strong and harrowing as any you’d find in children’s literature.

China sends the greatest number of international students to US High schools Statistically, the numnber of international high school students from China rose by 48 percent between 2013 and 2016.  This novel tells the story of a group of ‘parachutes’  who are dropped off to live in private homes and study while their wealthy parents remain in Asia. The book is told with alternative voices: Claire who comes to California from Shanghai and Dani, Claire’s host sister who’s mother works very hard to make ends meet. Claire has always lived a life of privilege and now must learn to cope on her pwn without daily parental involvement. Dani is a skilled debater and is determined to enter the championship and get a scholarship to Yale.  These two bright teenagers do not live together on friendly terms but in the end find out that they have things in common `the power of speaking out.’ There is a content warning included as a preface to the book: “This book contains scenes depicting sexual harassment and rape.”  As we journey through the novel we wonder about the who, what and why of harassment and rape. This is a powerful element of the story that I would say appears about 2/3 of the way through the novel and the Author’s Note that appears at the end of the book, informs readers of the reasons she wrote Parachutes, with incidents drawn from her own life. This is an important book to bring attention and understanding to the #MeToo movement.

EVERY STUDENT, GRADES 5 THROUGH 8 NEEDS TO READ THIS NOVEL

A powerful novel about a black boy killed by a police officer who mistakes his toy gun for a real threat.   As a ghost, this twelve-year old observes the devastation that’s been unleashed on his family and community in the aftermath of what they see as an unjust killing. The narrative draws connections through history as the boy meets other black boys including Emmett Till in heaven.

This is a FANTASTIC graphic book. A FANTASTIC graphic Nonfiction Book. A FANTASTIC nonfiction book about Basketball. In fact, everything you wanted to know about basketball and then some. Master comic artist Gene Luen Yang didn’t ‘get’ sports at all as a kid. While working as a computer teacher at a HighSchool in California, he decides to observe and document the training and challenges of outstanding players on the men’s varsity team. The book is rich in presenting historical information, issues of racism and sexism and the joys and challenges of competing. You can feel the sweat of the players, hear the roar of the crowds and be part and the joys and sorrows of winning and losing championships.  This book is certain to appeal to a wide range of readers whether they be graphic readers, sports enthusiasts or admirers of great books.  WOW!

DON’T STAND SO CLOSE TO ME
by Eric Walters

How can young people make sense of the COVID-19 epidemic? How will tomorrow’s readers understand what the world lived through in 2020. This book by Canada’s children’s literature hero Eric Walters, reads like a documentary because the. jumps off the pages of today’s news. Walters has his pulse both on world events and the minds and community of young people and with this title he has chosen to illuminate those world events through the minds of a group of grade eight friends. Don’t Stand So Close to Me, is to say the least, a timely read about a time when it was essential to stand alone, stand together. Available on line and in print from ORCA publishers. 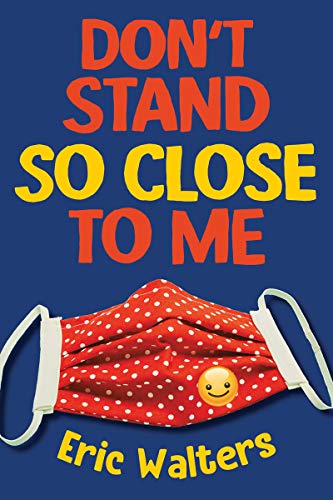