The COVID-19 crisis is,  to say the least, disturbing/ stressful. However, this period did provide me with the chance to catch up on some reducing, reduce my large pile of books and pass the time away beyond Netflix. These middle year titles kept me company. over the beginning weeks of ‘isolation’. Though quite varied in theme/genre I can honestly say that each of these 15 titles was great, most deserving four stars (out of four).

This novel was published in 2019 which is worth mentioning since it is the story of a president who has declared that “Muslims are a threat to America”.  This is a powerful example of text to world connections as the story, though set in the near future, is drawn from headlines of today.  Layala and her parents are forced into an internment camp for Muslim citizens and the 17 year-old girl is not giving up without a fight.  It is a story of activism and the power of resistance, despite the  consequences, in a fight for freedom. Prayers and thoughts can only go so far. Layla lives with the credo that you ‘can’t simply pray for what you want. You have to act. Wow! to this riveting novel that encourages readers to think about the need to fight complicit silence, a silence that exists in today’s world.

THE LINE TENDER by Kate Allen

I really enjoyed reading this novel that worked on many levels.  Much detailed scientific information is given about the life of sharks.  It eloquently describes how a middle -aged child copes with death.  It is about friends and families and digging into the past to understand how life carries on. Set in the coast of Massachusetts, The Line Tender tells the story of Lucy, who lost her marine-biologist mother and who now lives alone with her depressed father. A strong relationship with her friend Fred has the two friends on a field guide project inspecting the natural world around them – especially when a shark is brought to shore. I would give this book four stars (out of 4).

BOY UNDER WATER by Adam Baron

The central character in this novel is named Cymbeline Igloo (really!) and you can imagine the teasing and bullying this young boy gets with a name like that. On a dare, Cymbeline is challenged to partake in a swimming contest, but he has never ever been in the water. The story especially gains power when we learn about Cymbeline’s mother’s mental illness. When she disappears Cymbeline is on a quest, along with his wise friend Veronique,  to find out some truths about his mother’s life as an artist, his father’s disappearance, and the secret about why he has never been taught to swim.  A novel that ignites compassion in the reader’s heart.

24 HOURS IN NOWHERE by Dusti Bowling

The School Library Journal claims that this novel is reminiscent of Louis Sachar’s Holes with its ‘quirky characters and unique desert setting. I agree. Bowling (the author of the terrific Insignificant Events in the Life of a Cactus) has created a humourous suspenseful adventure that involves a bully (of course), dirt bike racing, the search for gold and an overnight 24 hour adventure of four characters being lost in a cave. An entertaining read.

PAGES & CO: Tilly and the Bookwanderers by Anna James

Imagine you could enter any book that you want to meet the characters and adventures you so admire. What book would you choose to visit. Orphaned Matilda Pages encounters both Anne (Anne of Green Gables) and Alice (Alice in Wonderland) and ends up being a bookwanderer in attempt to meet up with her mother who disappeared upon Matilda’s birth. A great fantasy adventure where reality and fiction intertwine. A book lover’s delight!!!

LALANI OF THE DISTANT SEA by Erin Entrada Kelly

This title by Newbery Medal Winner Erin Entrada Kelly is being well-reviewed and will certainly captivate readers who enjoy fantasy adventures. Disclaimer (I’ve said it many times) is that I’m not a fan of fantasy. Any story with character and creature names such as Nalupai, Fei Diwata, Ditasa-Ulod, menyoro, whenbo, Yootah, wallecta are sort of cumbersome for me to wrap my head around… but there are legions of young readers who are entralled with such invention. Applause goes to the author who has drawn her narrative from Filipino lore (though i’m not sure middle years readers would care about that).  Still, the island setting, the customs of the tropical island, the forces of good and evil, natural disasters, mysterious disappearances, a world of male domination, and especially Lalani’s quest to find answers for a better, healthy life provide ingredients for many many middle years readers. I’m glad I read it.

HERE IN THE REAL WORLD by Sara Pennypacker

Having enjoyed PAX a lot, I was looking forward to Pennypacker’s new novel about two misfits who meet up in an abandoned church. Ware’s family thinks he is attending the summer program at Rec Camp because of the ‘meaningful social interaction’ but when he encounters Jolene who is planting a garden amidst all the rubble. he gains strength from the project of creating a castle-like space as a refuge. There is some heart, and thought-provokingl writing throughout this tale, (“artists see something that move us, we need to take it in, make it part of ourselves. And then give it back to the world, translated, in a way the world can see it too.” (p. , but I think this book would appeal only to sophisticated middle age bookworms.

HIS NAME WAS WALTER by Emily Rodda

Apparently Emily Rodda has written over ninety books for children. I had never heard of this noteworthy Australian author but was introduced to her through this 2018 title. When the school bus breaks down, a teacher and four students come to settle into an empty country house.  After exploring an antique desk Colin and his friends find a handwritten book with strange illustrations and thus begins the story of an orphaned boy named Walter, a witch, a girl named Sparrow. As the children read through the book on a dark and stormy night they uncover mysteries and secrets, a prophecy and  a story of extraordinary love. This is a great book for readers who enjoy reading suspenseful, atmospheric adventures tales. The novel is divided almost evenly between the past and the present narratives, thus giving readers double the pleasure, double the fun.

THIRTEEN DOORWAYS: WOLVES BEHIND THEM ALL by Laura Ruby (12+)

The story is told from Pearl’s point of view. Pearl is a ghost. The events of life in a Chicago orphanage during the war years are seen through Pearl’s eyes as she chronicles the life of Frankie and her sister are caught in a web of poverty and injustice. The life stories of both Frankie and Pearl are sure to engage readers.  The backdrop of The Great Depression and World War II add a sense of culture and historical understanding. The author has drawn from the real life narratives of her mother-in-law to create a compelling read.  I’m not one to pick up ‘ghost story’ reads but reviews have been strong and I rather enjoyed the book, even though I was more intrigued and involved with Frankie’s story than Pearl’s.

This book was recommended to me by someone who attended my RFTLOI session. Thanks for the suggestion. I really like books with multiple voices. In Operation Frog Effect, we encounter several students in Ms. Graham’s class 5th grade classroom. Students recount experiences and projects (e.g., the egg drop project; the social justice inquiry initiative.) At the beginning fo the year students are given notebooks to describe and reflect on every day events and the narrative told in eight perspectives is presented in varied formats: (Blake/graphic pages; free verse/ Emily; and script/Henry; letters to a Mexican grandmother/ Cecila and letters of advice to the teacher/Kailey. Reminiscent of course of Because of Mr. Terupt by Rob Buyea (a favourite), this is a very  appealing read for middle year readers.

JUST UNDER THE CLOUDS by Melissa Sarno

Cora is struggling to cope with the surviving a life of being homeless. Readers will root for this feisty girl and her special needs sister as they strive to rise above moving from shelter to shelter.

ON THE COME UP by Angie Thomas (YA)

Thomas rose to fame with the incisive and vital novel, THE HATE U GIVE which gave a story about racism and police violence that adolescents could hang on to. The author has once again written a novel about the experience of young black people.  Bri’s father was a hip hop artist who was killed, her mother m Jay, is a former drug addict and her brother has the talent and smarts to get his masters degree. But Bri’s family is now a step away from being evicted from their house and even though Jay strives to do the best for her children, bad luck and bad circumstances smother the family. But this is Bri’s story and she the dream of becoming a hip-hop legend on her own terms carry her forward from day to day. At school , she is labelled a smart-ass hoodlum.  But her talents as a rap artist and a fierce determination, despite anger and frustration push Bri forward into an Afro-American girl ‘on the come up’. No doubt this book has as much appeal as Thomas’s first one.  Four stars.

Genesis prayed a prayer for so long: God make me beautiful, make me light and give me pretty hair. 13 year-old Genesis prepared a long list of reasons why she dislikes herself.  Ultimately she feels she is ‘too black’.  Remedies such as scrubbing her skin, lemon baths and cosmetic creams do not seem to change her life in any way. Her family has just been evicted their home, her father is a drunk who cannot confront realities and her mother is caught in the middle between Genesis and her father for  pulling the family together.  The grade eight student does some find some salvation in her new school, with new friends, a caring music teacher and the chance of getting to shine in the school talent contest. A strong read where readers enter, with authentic detail, into the anxieties and hopes of an adolescent Afro American girl. Highly recommended.

HOW TO BEE By Bren MacDibble

This novel received several book awards in Australia. A character named Peony wants to be a bee in order so her gramps and physically-challenged sister can survive living on a fruit farm. The story takes a turn when Peony’s mother kidnaps her daughter so that she can help make a living in the city. The young girl finds herself in a rich household and meets up with Esmerelda, a girl her age who is xenophobic.  The two develop a relationship, but Peony is determined to return to the farm which is for her a place called home. I read some online reviews that described this book as ‘cute’. There is nothing cute about this story of poverty, class, abuse, and yes, bees.   This novel was the best of the lot of current reads because of MacDibble’s unique voice and a story that both frustrates the soul but warms the heart. Wonderful!
THE PROMISE OF CHANGE: One Girl’s Fight for School Equality
by Joanne Allen Boyce and Debby Levy 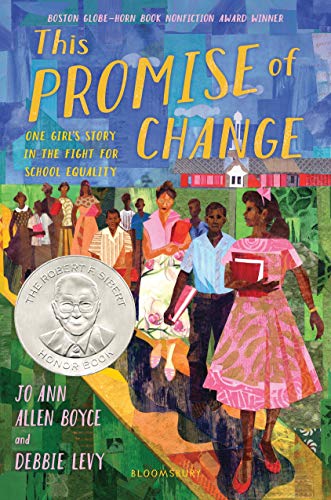 This is an outstanding example of nonfiction writing presented in verse style (mostly free verse, several rhyming pieces and other poetic forms (Ballad, Ode, Sonnet, Villanelle). Drawn from the experiences of Jo Anne Allen and 11 other African American students who were the first students to integrate a public high school in the American South. This is a landmark event in the history of Racism and Civil Rights. This was a courageous journey for the Clinton 12, in Clinton, Tennessee, but the journey was fraught with bigotry and violence.