Listed below are ten ‘adult’  titles I’ve read over the past month or so:

SAILING ALONE AROUND THE ROOM: New an selected poems by Billy Collins

The anthology is divided into five sections (1988/1991/1995/1998/new poems and I chose to read one section / day this week. I turned down the corners of about 15 poems which, I’d say is a pretty good roster in a collection of 100 + poems. Thanks to my friend Bob for the birthday gift.

Each one is a gift, no doubt,

mysteriously placed in your waking hand

or set upon your forehead

moments before you open your eyes.

POETRY 180: A turning back to poetry by Billy Collins (editor) / poetry

From the introduction: “The idea behind this printed collection, which is a version of the Library of Congress “180” website, was to a generous selection of short, clear, contemporary poems which nay listener could basically ‘get” on first hearing – poems whose injection of pleasure is immediate.? Are you kidding me, Mr. Collins??? If the intent is to remove torment from adolescent readers encountering poems (read/ listened), then this collection mystified me, not only for the choice of poems but for it’s vision to ‘beckon people back to poetry them a variety of poems that might snag their interest. For me, far removed from adolescenthood, I caught the meaning very few of the poems on first read.  Oh, how I love the idea of a poem a day. but I would say that most of these poems need deeper contemplation, collaborative dialogue, and a forum to share  “I wonder…”  thoughts.  I chronologically read 20 poems a day over a two week period and concur with a statement borrowed from Fran Liebowitz’s musical aesthetics: ‘Good poems are poems are poems I like and bad poems are poems I don’t like’. Perhaps a re-read is in order. Perhaps not.

I wonder what high school students would think? I wonder what poems they would gather together for a Poetry 180 collection.

Two guys go into a bar and talk and talk and talk. (and drink and drink and drink).  Doyle has reader eavesdrop on the conversations of Davy and Joe who have been drinking pass since their youth. Stories abound about girls of their dreams, first-encounters, kids, separation from wives, loss of parents, and pub journeys in Dublin. What do we remember from the past?, what is important to remember? Who do we tell these stories to seems to be central to the themes of this book, as is the multi-faceted forms that love can take throughout our lives. Hang in there.. the novel eventually packs an emotional punch at the end of the night of drinking and talking, drinking and talking.

ALL MADE UP by Janice Galloway / memoir

This title is the sequel to the author’s memoir about growing up in small-townScotland.   Here Gillespie shares memories of her adolescent puberty years which involves boyfriends, academics and a devotion to playing music.  Once again we meet her stoical mother and her domineering older sister. I preferred the earlier title but sometimes when you learn about the struggles of a character you are intrigued to learn how a character’s  evolves and moves on against the odds..

This memoir outlines the journey of a Muslim woman as she digs into her past to confront the traumas of growing up. The book is presented in alternating timelines: Childhood,  Undergrad, Twenty-something which allows the author to dig into experiences with her family and then with her university education experiences, therapy sessions and reflections from a twenty-something adult. Mehak’s Master’s research focussed on how teacher-student relationships can help build resiliency in students who have experienced childhood abuse and neglect. Mehak Jamil received her Masters of Teaching degree from OISE and her book Opening Doors is a story of resilience and through personal narrative and reflection,  ‘teaches’ readers about the effect of being berated and harmed by a parent.

An elderly Jewish named Mendelssohn, a retired judge,   living in the Upper East Side of Manhattan with the help of a caregiver decides to dine out at a local posh restaurant where he will meet his son for lunch. After te meal, Mendlessohn leaves the restaurant and is attacked. The case to find out who the attacker was is unravelled by detectives who depend on events being captured by cameras.  Life appears differently from different angles. Each chapter in the short novella (143 pages) is introduced by a stanza from Wallace Stevents poem, “Thirteen Ways of Looking at A Blackbird.”  I treasure this statement, “Just as a poem turns its reader into accomplice, so, too, the detectives become accomplice to the murder”.  Readers as accomplice – brilliant! I so admired APEIROGON by this author, that I’ve since been meaning to dip into his other books. I will soon get around to Let The Great World Spin which has been sitting on my shelf for a while and I ordered 4 more titles from Amazon. August should be Colum McCann month for Larry.

THE BOOK OF MEN edited by Column McCann (short stories)

This anthology is a collection of 80 original short short stories (maximum 3 pages per piece) created by male and female writers from across the globe. Stories are presented, without titles, in alphabetical order by author. The essential question that inspired each story was to address “what it means to be a man and how to live up to that responsibility” (introduction). The anthology was written in honour of Esquire Magazine’s eightieth anniversary (2013) and Narrative 4 whose mission is to ‘use storytelling as a means to  understand ourselves and one another. (introduction).  I read every story sequentially, and like most short story and poetry collections some work better for me than others. Many of the narratives left me rather puzzled. That’s OK.  I turned down the corners on a handful of favourite selections (i.e, Michael Cunningham,  Elinor Lipman, Edna O’ Brien).

SUCH A FUN AGE by Kiley Reid

This is a story about a rich white woman, Alix Chamberlain  and her relationship with her twenty-five-year old babysitter, Emira Tucker. A “Reeses” Bookclub featured title. The novel begins with an episode at a supermarket where Emira, who is taking care of the Chamberlain child, is accused of kidnapping the two year old child. The event was captured on video but Emira is determined to keep it hidden. She is determined to find a better life for herself in terms of finding a job, a suitable place to live and love. This is a story about  class and race, power and ambition. It is also a story about how challenging it is to shake off the past where what has happened to us is hard to shake off. Those who enjoyed Little Fires Everywhere may like this, dare I say “woman’s book.”

Some of my favourite trips have been to Italy.  This travel guide takes readers through a journey with the author and his wife’s as they adventure through Sicily, Sardinia,Rome, Tuscany and Cinque Terre etc. .  Experiences with food, hotels, , touring churches and castles and getting directions offer  reminiscencesabout times spent travelling in Italy or a motivation to visit La Bella Italia. I felt that I was ‘there’ when reading about places I’ve been so lucky to have visited. And hope to perhaps see again sometime. Maybe. 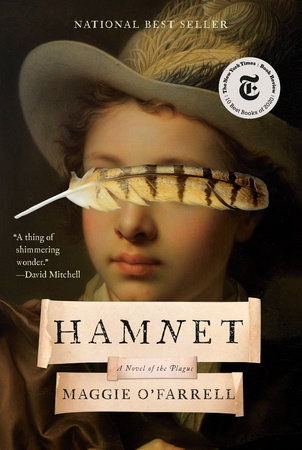 Rave reviews abound. My friend Debbie raved about this novel. My friend Eleanor raved about this novel. The author was inspired by the unknown death of Hamnet, son of William Shakespeare , in 1956. O’Farrell invents details about the life and cause of death pestilence).of Hamnet and his symbiotic relationship  his twin sister, Judith, his father who is working in London and his mother, a central character of the story, who is gathers medicinal herbs and heals village members. The setting of the story predominates whether we are taken into forests, meet the family in their homes, visit the streets of Stratford-upon-Avon or journey to London in the 1600’s.  This is a book where the research and detail astonishes as much as the depiction of the devotion, marriage, and profound grief.. Every every sentence is beautifully crafted: She (Agnes) takes in the thatched eves of Hewlands, to her right, the white scree of cloud overhead, the restless branches of the forest, to her left, the swarm of bees in the apple trees.”  “He feels again the sensation he has had all his life: that she is the others side to him, that they fit together, him abd her, like two halves of a walnut.” NOTE: There are different cover versions of this novel, and in some cases, the book t goes by the title HAMNET and JUDITH